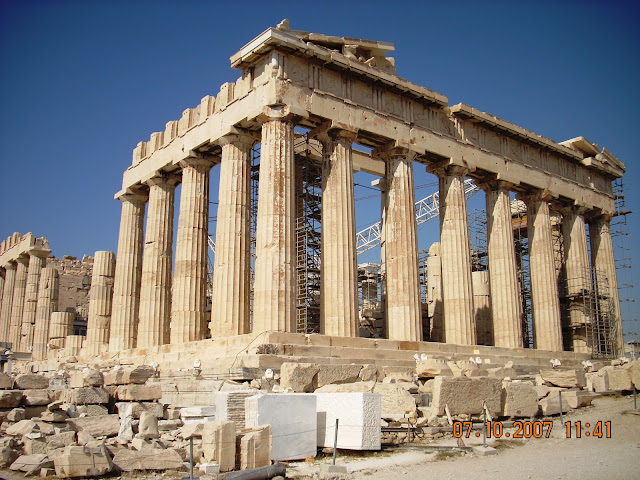 
The architecture of the Parthenon

The "Old Parthenon" on the Acropolis of Athens, made of poros stone, had been destroyed by the Persians in 480 BC. Thirty three years later, in 447 BC, Pericles ordered the construction of the new Parthenon, a Doric order, peripteral temple made of white Pentelic marble. The architects were Iktinos and Kallikrates and the sculptor, who supervised the work and the decoration, was Pheidias. Pheidias himself made the chryselephantine (gold and ivory) statue of Athena Parthenos that was standing on a pedestal inside the temple. Her head reached the roof of the sekos (cella) which was 12.45 m high.

In this photo, taken on October 12, 2002, we see that the "new" Parthenon was built almost exactly on the pedestal of the "Old Parthenon". The difference is about 1 m to the north. (This is the south side - looking east). 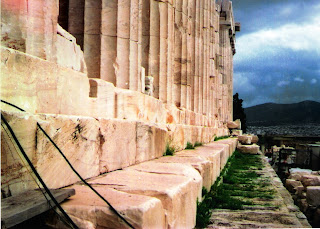 ﻿
The pedestal consists of a small base and three steps. The third step, where the outer columns of the peristyle stand, is called stylobates. There are 8 fluted columns in the narrow sides and 17 in the long sides. Thus, the total number of columns around the temple is 46, or 2(6+17) = 2 x 23. (*The number 23 is the arithmetic value of the Greek words "Η ΘΕΑ" (the goddess) if we add the numbers that correspond to each letter - e.g. Η=8, Θ=9, Ε=5, Α=1). In general, if the number of the columns on the narrow sides of an ancient Greek temple is α, then the number of the columns on the long sides is 2α+1 (twice the first number plus one).

The entrances were on the east (main) and the west sides. After the first outer columns of the peristyle, there are two more steps and six smaller columns on the top of them and in front of the sekos (cella). The first part of the sekos on the east side - where the statue of Athena was standing - is called pronaos or prodomos and the second part on the west side opisthodomos (= back room). The total length of the sekos inside the walls is 44.166 m (29.7974 for pronaos + 13,2145 for opisthodomos + 1.154 for the wall between them). The width is 42 MC (19.065 m).

The dimensions of the sekos on its "stylobates" (including the walls and the 6 columns in the front and in the back) are 59.087 x 21.715 (m). The slabs of the frieze around the walls of the sekos were about 160 m in length and 1.05 m high. They were carved in situ and depicted the Panathenaic procesion.


The dimensions of the Parthenon 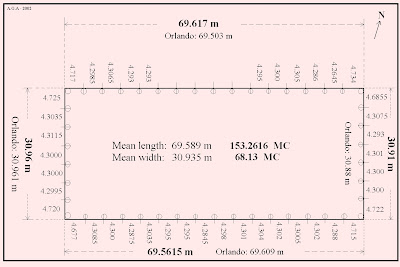 The center of each column - with the exception of the four in the corners - has been put exactly on the joints of two adjacent blocks of the stylobates, so most of my measurements are between these joints (or the centers of the columns). For the four corner columns, I measured from the corners to the center of the next column. Because of the restoration work at that time, part of the north side was covered and I was not able to measure there. However, I took one measurement of the whole side. 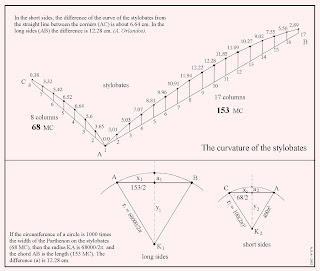 According to these numbers, the true dimensions in megalithic cubits are about 153,262 x 68.13 (MC). But the measurements were made along the curves of the stylobates - not in a straight line - so they are a little longer. The difference, of course, is negligible.

In the short sides, the difference of the curve  of the stylobates from the straight line between the corners AC is about 6.64 cm. In the long sides AB, the difference is 12.28 cm.

If the curves of the stylobates are arcs of circles, the radii KA are 68000/2π for the long sides and 400π^2 for the short. This means that the circumference of the first circle is 68000. But the number 68 is the width of the short sides. 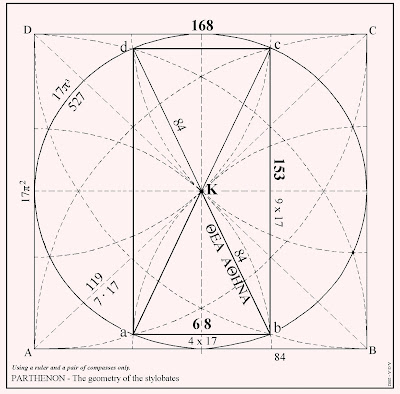 The geometry of the stylobates 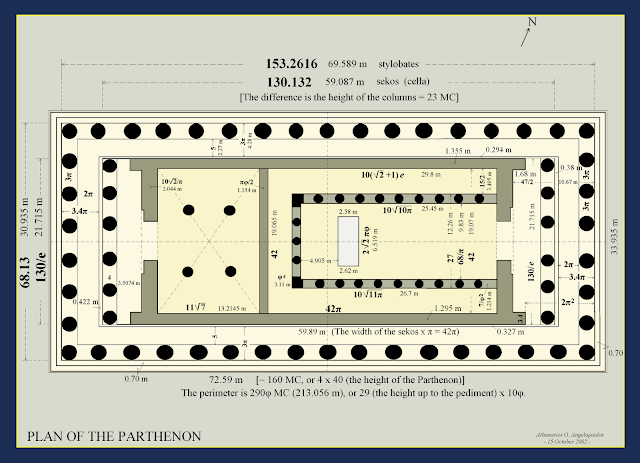 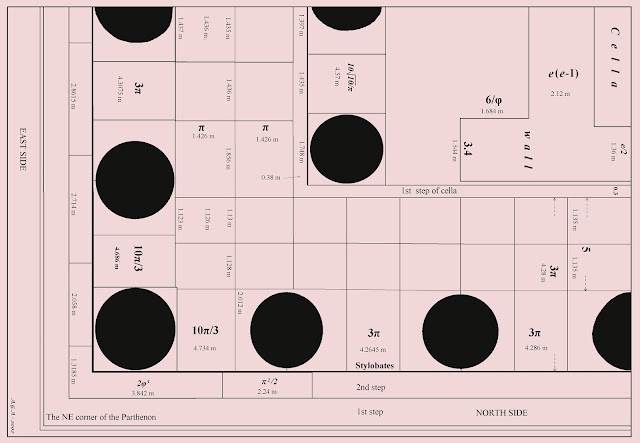 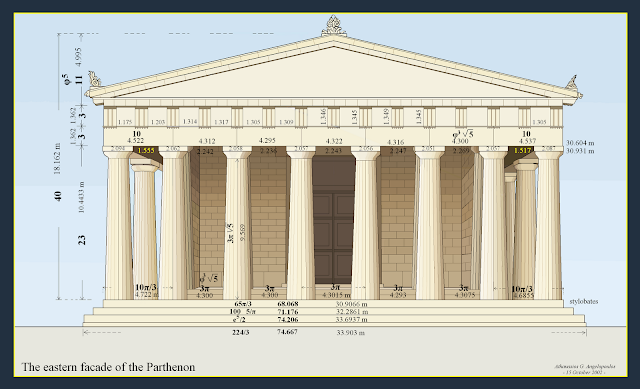 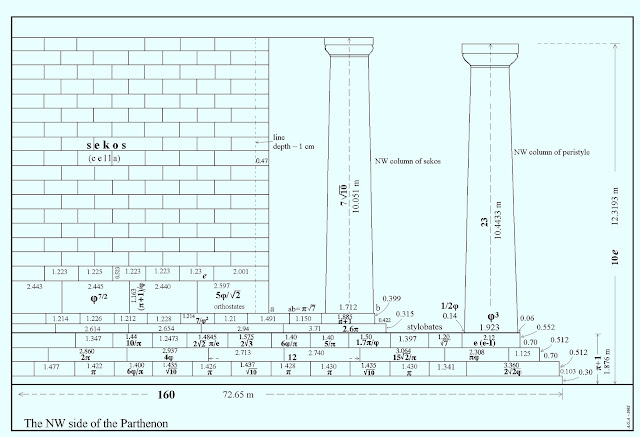 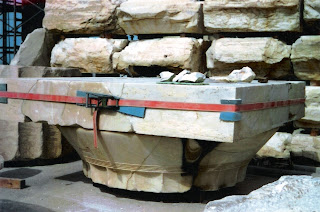 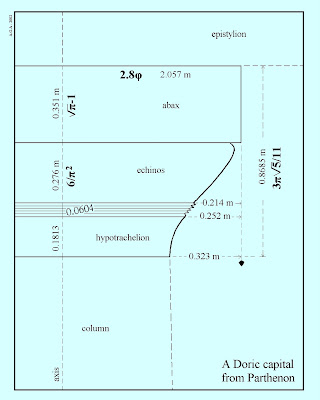 Restoration of a broken capital on the floor of the sekos (October 2002). 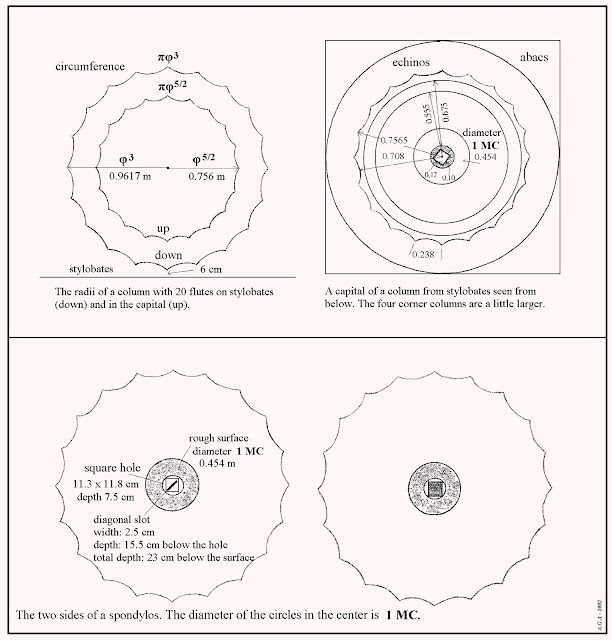 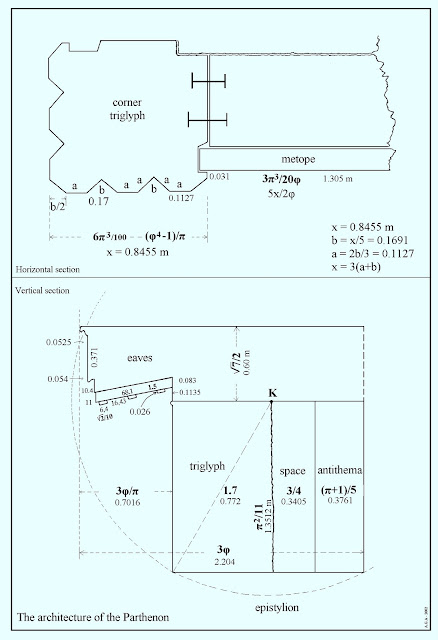 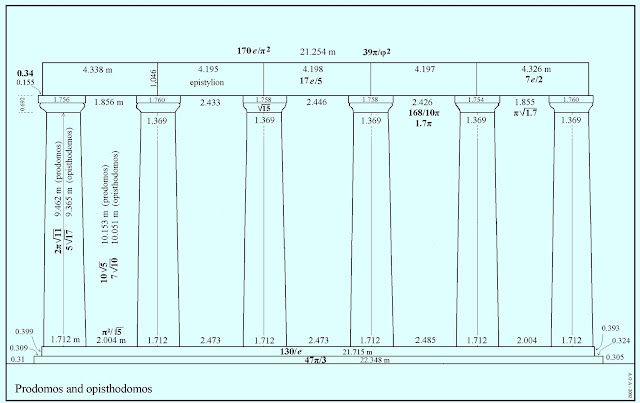 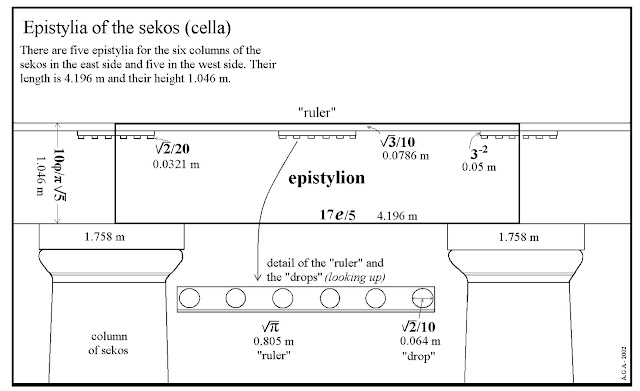 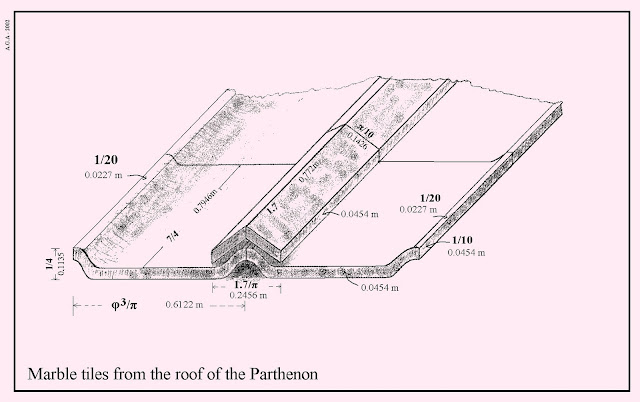 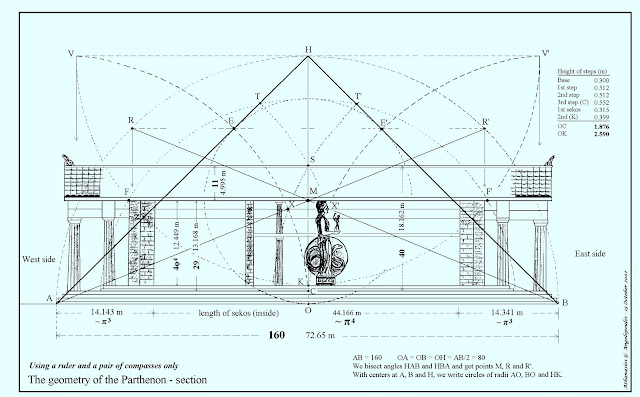 Athang1504
Athanasios G. Angelopoulos (Username: Athang1504)- I was born in Athens, Greece, on August 19, 1953 and I have studied mathematics, astronomy and ancient Greek language and history. I'm also an amateur painter, sculptor and photographer. In general, I like science, arts, music, sports and everything that is creative. I have spent the last thirty years of my life in research and writing. I have written and published (not self-published) 14 books and many articles that have been read by more than 100,000 people in my country since 1986 (in Greek). They contain only original work based on this research. I believe that I have found some interesting things and, obviously, this is the reason I'm presenting some of them here (in English).